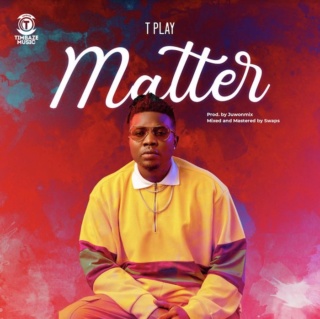 One of the new generation’s most talented upcoming performing musicians in Nigeria known as TPlay has released a brand new single titled Matter.
This up-tempo song with lovely cadence knitted with Pidgin English lingos has all the attributes of becoming a hit record.

Produced by Juwonmix, and mixed mastered by Swaps, there’s no doubt that this will become one of the fan’s favourite songs in 2020.

This new record is off his soon to be released yet unnamed 6-track EP due out in August 2020.

Over the past few months, the artiste TPlay christened Ezeme Hyginus Ikechukwu signed to Timbaze Music has published several chart-topping songs like Karashika, Hold Ya, and ‘When Money Dey’ featuring Olamide.

The new song Matter has all the elements to attract massive airplay. In the second week of July, TPlay will also encourage his audience to join in to do a viral song challenge tagged #whatisthematerbytplay to win a weekly cash prize.

To become a winner, do a 30seconds video dancing to the song Matter, post it on Instagram and tag the artiste.

When the artistes repost on his wall and get enough likes on your visuals, then you stand a chance of becoming the winner. Also, follow the artiste on all his social handles.

DOWNLOAD THE MUSIC
I guess you enjoyed the music? We'll love to hear from you, use the comment box to share your thoughts on this music by "Tplay" titled "Matter"