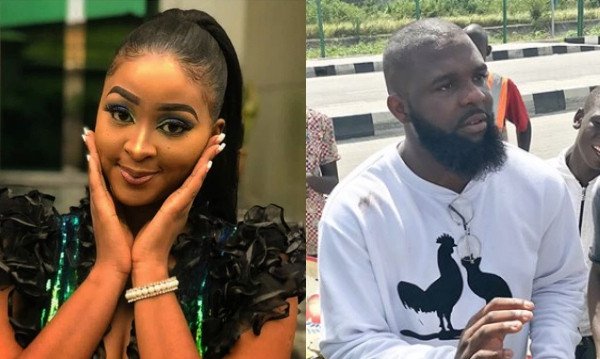 Etinosa has replied Oyemykke’s recent call-out post in which he moved on from calling her an apologetic nudist and a ‘low life’ to describing her as a man with a disability.

Recall we reported that the duo engaged in a war of words which stemmed from Etinosa’s comment over an ad Oyemykke featured in. For a catch-up on how it all began, read here, here and here.

Serving a reponse to Oyemykke’s deleted Instagram post in which he shared a screenshot of her Insta-Live session with MC Galaxy in which she stripped naked, Etinosa who refused posting a photo of the UK-based Motivational speaker, said he is desperately looking for a platform to “blow with”.

The Nollywood actress further described Oyemykke as a “jobless egbedin” (drum) and also added that he is a ‘house boy to a white woman in London just for a green card’.

“Good morning oo Oyemyke has replied me. I just read it and all I could notice was, even when he’s typing he’s still shouting. I can see he’s looking for a platform to desperately blow I will not post him here. The jobless empty EGBEDIN who is house boy to a white woman in London for Green card has to pay me for advert. OZUOR”