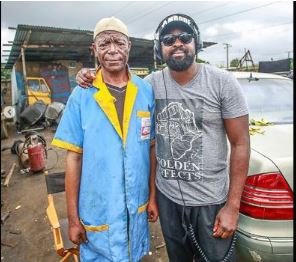 In a lengthy post on Instagram, Afolayan said it had always been his dream to work with veterans in the industry.

“I just wish I knew how to relate with death and human demise but the honest truth is that, I don’t.

I have always wanted to work with the veteran Alabi yellow since TK and I discussed having him in a film titled ‘Dog on a lion’s trail’ over 15 years ago. However, the project didn’t take off for some reason. Reconnecting and working with the veterans in the industry is something I am passionate about, hence my featuring the likes of Papalolo, Baba Eda, Baba Gebu, Aderupoko and the late Alabi Yellow in Mokalik. I believe his sojourn in life has fully fulfilled the essence of why he was created.

On behalf of the entire Golden Effects team, we hope the Almighty grants his entire family the grace and fortitude to bear this huge loss.

According to him he had envisioned working with Alabi Yellow on a film titled ‘Dog on a lion’s trail’ over 15 years ago but the project never took off.

He, however, got the opportunity to work with him on the set of his most recent film, Mokalik and it was an experience he really appreciated.

Afolayan lamented that he didn’t know how to relate with death and although the actor’s exit was painful, he believes he had fulfilled his purpose on earth.

He also prayed that God grants the family of the deceased the fortitude to bear the loss.

Alabi Yellow is believed to have died in the early hours of Sunday in his home in Ikorodu, Lagos State after having suffered a stroke.
EmmiAdmin